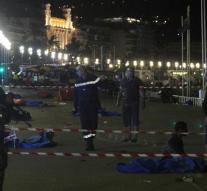 - Eyewitnesses of the massacre in Nice talking about bodies like skittles flew through the air and people pinch got stuck under the wheels of terror truck.

Others saw brave bystanders who rushed to the doors of the truck to try to force the driver to stop.

One of the people in the crowd stood during the massacre was a journalist Damien Allemand local newspaper Nice Matin. According to him, the panic began shortly after the end of the fireworks show.


'A huge white truck drove at a ridiculous speed on thousands of people,' he says on the website of its newspaper. 'He sent so that he would touch many people. I saw bodies flying through the air like cones. The screaming I will never forget. '

Another witness is telling iTele that he thought he was hallucinating when he saw the truck zigzagging through the crowd. 'The truck drove through everything, poles, trees. We have never seen anything like it. Some people were hanging on the doors to stop the driver. It was chaos. There were bodies everywhere. '

Witness Lucy Nesbitt-Comaskey tells Sky News that she quickly realized that the shots they heard was not fireworks. 'Suddenly everyone started screaming. Everyone ran the restaurants inside. The owners said, 'please do not leave, come in, come in. ''


The Briton Will Shore tells the BBC: 'There were lots of screaming, running around people. Everyone was pushed out of the way because there was great fear. Certainly when shots were heard. I had a few people back on their feet. '

'You could really see the fear and panic on the faces of the people. It was a huge crowd who was trying to get away. '