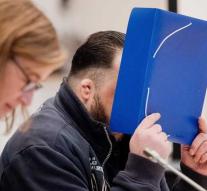 oldenburg - German nurse Niels Högel has announced the murder of at least a hundred patients. To the question in court about the accusations against him, the horror nurse replied with 'yes'.

Earlier he had already been sentenced to life for two murders and two attempts at manslaughter. Högel worked as a nurse in two hospitals from 1999 to 2006. He administered the drug Gilurytmal in more than 100 patients, leading to serious cardiac arrhythmias and sudden drops in blood pressure. That is how the NOS reports.