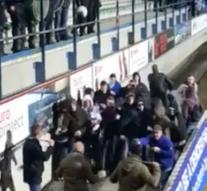 About fifteen rioters, according to the Belgian newspaper Gazet van Antwerpen fans of the Brabant club Helmond Sport were pushed back by two policemen. On the Internet images of the brawl appeared.

The two resolutely acting agents are known as 'spotters' who in civilian keep an eye on. The images show that the ME has been drummed up, but men can not help but watch unemployed behind a high deposition. After peace was restored, the game could continue.

On the Facebook page of fans of Beerschot three agents are showered with compliments.