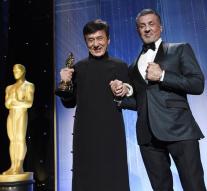 - Jackie Chan has received during a film gala in Los Angeles an honorary Oscar. The 62-year-old Hong Kong-born actor was nearly forty years ago, his debut in the film Hand of Death. He worked since participated in over two hundred films, not only as an actor but also as a stuntman, writer and director.

Chan has specialized in comedy action movies over the years, in which a martial arts, kung fu usually, central. He worked on movies like Police Story, The Cannonball Run, Rush Hour and Who am I ?. In many movies, he did his own stunts. He has thus, over the years, broken every bone in his body, he once said. As a stuntman, he worked on films by the legendary Bruce Lee.

In the eighties, he founded his own production company, so he could work independently from the major studios. He made that way in eight years forty films. However, he was never considered as a full actor and filmmaker with the film critics. The audience thought differently and Chan gave many commercial successes.

The successful actor holds a second career after that of singer. He spent several plates in the Chinese out.