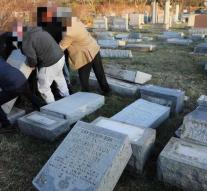 cambridge - English homeless people have opened graves to sleep in. That happened at a notorious cemetery in Cambridge, where passersby regularly see how people inject themselves with drugs. So far, 213 needles have been found.

The cemetery is a famous hotspot where the police have been chasing homeless people, illegal immigrants and drug addicts for years. 'The municipality is also working with volunteers to map out the most important places and to keep them clean,' says a spokesperson for the British Metro.

According to the police, it is 'not unusual' for homeless people to go to sleep in old graves. 'One resident once saw a man, with his pants down, injecting himself into his thigh. She was shocked, 'says a spokesperson. 'It happened in the sight of a lot of people. '

There are many old graves on the cemetery. Large parts of the site are covered with vegetation. That will soon be removed. 'We will start with it when the breeding season for birds has ended. We will also patrol, 'said the municipal spokesman.