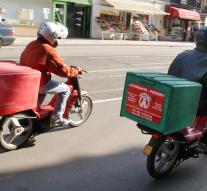 brussels - The home delivery of meals and shopping online do have soared in Brussels at the weekend. In Brussels goes Since Saturday, the highest threat level and people are advised to avoid crowded places. Also many shops and restaurants closed the doors. A golden opportunity for home delivery sites.

This is what the home delivery pizza. be, the Belgian subsidiary of Thuisbezorgd. en, with more than 350 restaurants in the Brussels Region, the number of orders for Saturday and Sunday to increase by 25 percent. And Monday ordered there is more than usual, according to the Siska Lombaerde, responsible for Belgium. The fact that supermarkets were closed and the fact that people might deliberately have chosen to stay home Lombaerde sees the main reasons for the surge in orders.

According to her was only a ' handful ' restaurants closed or they did not home delivery. " usually for practical reasons, not to fear. " As deliverymen were hardly in the street or because it was blocked by police. Anxiety in delivery staff is not there according to her. " Everyone is cautious. "

Also supermarket group Carrefour sees a ' slight increase ' in the number of online orders and home deliveries. " But this was not the year's record weekend, though this weekend in the top three ", said spokesman Baptiste van Outryve. He stressed that despite the threat of terrorism " a lot of people in the shops, even children ".

Carrefour has four offices in Brussels Monday. This concerns offices in places that are not accessible by order of the police, as in a shopping mall in the center of town or in a subway station. The supermarket company has taken additional measures to ensure the safety of staff and customers. There are, among other others hired security guards.

Also supermarket group Delhaize has introduced additional security. The terror level seems to have no further influence on the chain. " We see no impact ", said spokesman Roel Dekelver. There are no less or more customers or increase the number of online orders and home deliveries. It is not hoarded by customers, said the spokesman. The company has closed two of the seventy stores in Brussels.