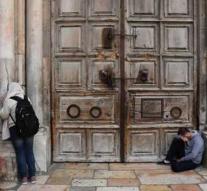 jerusalem - The Holy Sepulcher in Jerusalem, where Jesus was crucified, buried and resurrected, re-opens the doors Wednesday morning. That is what Haaretz magazine has announced. The leaders of the three main Christian denominations closed the sanctuary on Sunday in protest against a municipal tax plan and the planned land policy of the government. Both proposals have been put in the drawer for the time being.

The city council of Jerusalem wanted to levy taxes on ecclesiastical possessions that are not used for religious exercises. The Israeli government launched a controversial bill to allow retroactive expropriation of land sold since 2010 by Greek Orthodox and Roman Catholic churches to real estate companies and project developers.

Most plots of land, totaling around 50 hectares, are located in the popular districts of Rehavia, Talbiya and Nayot. The new owners would be compensated financially, but residents feared having to relocate after the lease period.