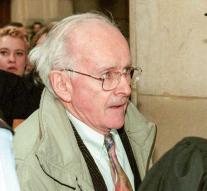 paris - The French Holocaust denier Robert Faurisson died in Vichy at the age of 89. According to the French media, his publisher Akribeia confirmed this after news agency AFP had heard the news from his sister. The former professor of literature at the University of Lyon came into contact with the law several times because of his controversial views, which caused disgust all over Europe.

Faurisson concluded in the late 1970s that gas chambers and Nazi concentration camps were fabrications. Among other things, he published a book in collaboration with the Belgian Siegfried Verbeke, in which he questioned the authenticity of Anne Frank's diary.

He claimed that her father Otto had written it after the war. Distribution of that work by Faurisson and Verbeke was banned in the Netherlands.

Faurisson was friends with many like-minded, including the infamous anti-Semite Ernst Zündel, who died last year, and the widow of NSB leader Meinoud Rost van Tonningen, Florrie.