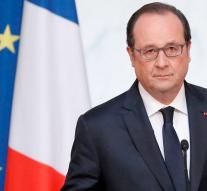 - French President Francois Hollande makes this month a tour of five countries to stand up for the European Union.

The trip is designed to give the union after brexit referendum in Britain 'new impetus', made the Elysée Monday.

Hollande will visit Portugal on July 19, Austria, the Czech Republic and Slovakia on 20 July and Ireland on July 21.