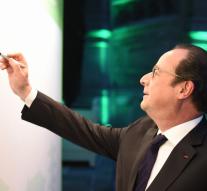 - French President Francois Hollande will visit Friday the military personnel on the aircraft carrier Charles de Gaulle, which lies off the Syrian coast. "He will meet the soldiers who are involved in the intensified fight against Daesh (Islamic State) in Syria and Iraq," said the Elysée, the president's office.

The aircraft carrier with 38 on board aircraft was deployed after IS had claimed responsibility for the attacks in Paris, where 130 people were killed.