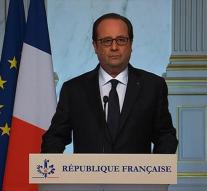 - France extends the state of emergency introduced after the terrorist attacks in Paris last November, by three months. President Francois Hollande said this at a press conference following the bombing in Nice.

Thursday Hollande had said that would end the state of emergency.,, We can not prolong indefinitely a state of emergency, which has no meaning. That would mean that we are no longer a republic with a rule of law in all circumstances, '' said Hollande against journalists in the traditional interview on July 14, the French national holiday.

France extended the state of emergency twice before, so the police received additional powers and other security measures were introduced.


Hollande, on the press conference spoke of a terrorist attack, announced to travel later on Friday to Nice in order to show support for the city.