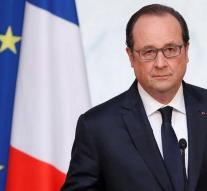 moscow - The presidents of France and Russia, Francois Hollande and Vladimir Putin and German Chancellor Angela Merkel on Wednesday by telephone consultations on the conflict in Ukraine and Syria. Putin spoke among other things about the conference on Syria January 23 at the initiative of Moscow and Ankara will be held in Kazakhstan.

Late last month Russia and Turkey announced a file in Syria, the fighting has not stopped, but reduced. Russia is the mainstay of the Syrian government of President Bashar al-Assad and Turkey is among the fiercest opponents of Assad. Yet together they try on some points to raise.

Ankara made Wednesday, for example, that Russian warplanes in consultation with Turkey attacks carried out on positions of the Sunni extremists of the Islamic State.