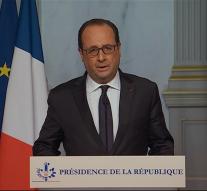 - The usually in polls miserable scoring French President Hollande gets more respect after the terrorist attacks on November 13 in Paris. According to a Sunday in the Journal du Dimanche poll published no less than 27 percent of respondents satisfied with him. That is seven percent higher than in October. It's a nice score for François Hollande.

The socialist was mid May 2012 President of France and does not impress in polls. The results were published Sunday, are the best since January. Jihadists then did the editors of the magazine Charlie Hebdo and attacked a kosher supermarket in Paris and then rose Hollande in the polls twelve percent to 29 percent of respondents satisfied. In December 2014 was only 17 percent satisfied with the president.