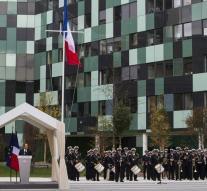 - The French Ministry of Defence has since Thursday its own " Pentagon ". President François Hollande opened in the southwest of Paris, the new ministry, which covers 140,000 square meters. It is headed by the largest rooftop solar panels of the city and the complex is also planted in many places.

The complex at the Plaza Balard was christened by the media Balardgone. It took 4 billion and replaces a range distributed mostly historic houses, the ministry previously used. The center of the complex is a hexagon (hex). The glass exterior and planting conceal thick reinforced concrete walls to keep attackers out. Architect Nicolas Michelin said, according to Le Figaro that 60 percent of the ground is planted. The Paris Pentagon is therefore " an ecological fortress called ".

It employs 9300 staff. The minister himself, Jean-Yves Le Drian, is not there yet. Probably he bother to take leave of the seventeenth- century palace Hôtel de Brienne. Le Drian there is the office of war prime minister Georges Clemenceau (1841-1929) restored to its former glory and is still working there.