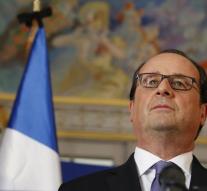 - The speech made by French President Francois Hollande Friday in Nice, was not only received with tears and applause. Back pay people a bloody price for the failure of the government that can not protect her against terrorist attacks, finding many French. That came to be the president considerable boos.

The popularity of the government has been historically low and the 84 dead and over two hundred wounded by the attack on the rented truck on the Promenade des Anglais in Nice Thursday night, do not do it well. Again the finger pointing also to the security forces who have not discovered in time the evil intention of the 31-year-old Tunisian Mohamed Lahouaiej Bouhlel. Three days of national mourning will change little to this.

The secret service and the police search diligently for clues. To begin with the ex-wife of famed as aggressive killer was detained for questioning. They had three children together. Other suspects have not yet been displayed. The killing of civilians by truck was suggested during Ramadan in a video of Islamic State. But Bouhlel, possibly only a residence permit in France was staying, was not exactly known as jihadi.


For the third time in eighteen months had Prime Minister Manuel Valls publicly declare after a crisis meeting with his cabinet that his country will not let destabilized by terrorists. The so-called Defense Council, Hollande, Valls, key ministers and the head of the army and the security forces made no specific announcements afterwards. Remains the state of emergency. In force since the terrorist attacks in Paris last November and would be removed properly.

Again to hear the call to combat terrorism across the globe. In addition to expressions of sympathy, not sounded for the first time within the European Union, Russia, the United States and NATO, the pleas for more effective measures against terrorists. Monday meet in Brussels together the foreign ministers of the European Union being the first to discuss the issue at international level. It is Boris Johnson's tough baptism of fire as an emissary of the British.