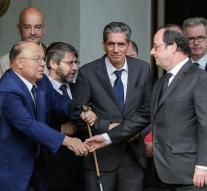 - After the attack Tuesday at a Catholic church in northern France, President Francois Hollande met with representatives of the religious communities. Wednesday he invited Catholics, Orthodox, Protestants, Muslims, Jews and Buddhists from the Elysee in Paris. Subsequently, the government bends over additional security.

Tuesday night Hollande had already received the archbishop of Rouen, called by Pope Francis. Two attackers had previously been a church in Saint-Étienne-du-Rouvray five people hostage and killed the priest. The perpetrators were later shot dead by security forces. According Hollande had the attackers in the name of terrorist organization Islamic State (IS) acted.