Home / World / Hollande : I assure you that they will fail 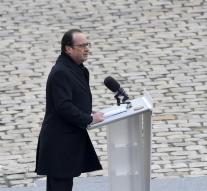 - We're going to fight until the end and we will win. That said François Hollande Friday during the commemoration of the attacks in Paris, which killed two weeks ago 130 deaths. " I assure you that they will fail," said the French president. " Our enemy is hatred. France will do everything to destroy the army of fanatics who did this. "

Hollande called on the French people to continue his way of life. " Because they were the freedom they have been murdered. 130 names, 130 broken lives. 130 voices silenced forever. Together we reduce the pain. Among the victims were many musicians. The music does not stop. "