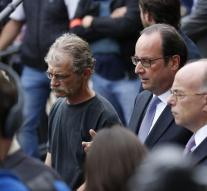 rouen - The hostage-takers in the French church have relied on the terror organization Islamic State (IS). That said, French President Francois Hollande Wednesday during his visit to the site near Rouen, without mentioning further details.

Hollande also stressed that France is fighting Islamic State,, by all means 'will continue. He called the attack on the church, where the priest was killed,, an outrageous terrorist attack '.