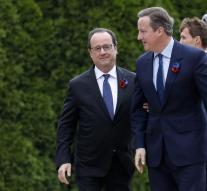 thiepval - French President Francois Hollande and British Prime Minister David Cameron on Friday commemorated the Battle of the Somme. They were exactly one hundred years later in the French Thiepval consider the many hundreds of thousands of victims of this bloody episode from the First World War.

Hollande unexpectedly made his appearance. According to the Elysée to underline that the brexit referendum has not definitively damage the relations between Paris and London. Hollande said last week that he regrets the withdrawal from the European Union, but still closely will continue to work with the British.

Even Britain's Prince Charles and his eldest son William and their wives Camilla and Kate attended the ceremony at the memorial at Thiepval in. Germany, then the opponent, issued on the former Federal President Horst Köhler.


The Battle of the Somme is considered the bloodiest battle of the First World War. In four months of trench fighting over a million soldiers lost their lives and overcome the allies just a few kilometers pitch.