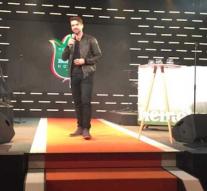 gangneung - Shortly before the official opening of the Olympic Winter Games, the Holland Heineken House in South Korean Gangneung was opened this morning.

'We hope to be able to welcome many medal winners here,' former Olympic 1500 meter champion Mark Tuitert reported at the ceremony. This hope was also expressed by Vice-President Annette Mosman of sports umbrella NOC * NSF. She is currently replacing foreman André Bolhuis, who has been in bed for a week with heavy flu. The former hockey international hopes to join South Korea early next week to be able to join Team Holland.

That there will be the necessary honors in the Orange Pavilion built in a hotel complex, can hardly be missed. Yesterday, chef gave the mission Jeroen Bijl already for at least thirteen slices to go, size to have an expectation of fifteen. According to the sports organization, the monster score of 24 medals achieved in Sochi four years ago is now unrealistic in Pyeongchang.

It is the fourteenth edition of the Holland Heineken House (HHH) at the Olympic Games, according to the French brewery director Pascal Gilet. He characterizes the Orange base as 'typical Dutch'. 'This is exactly where a small country can be big. This is a meeting place for entrepreneurs, Orange pride, and the joint celebration of successes. And that's the best thing if you can do it together. '

Since the first edition in Barcelona (1992), two hundred Dutch medal winners have been honored in the various HHHs. According to the beer director, this tradition is an important pillar of success: 'Without sportsmen there is no Holland House. '

On behalf of NOC * NSF, deputy chairman Mosman also pointed out that the Orange base is not just a party factory. 'It is a safe home for athletes. Here they can meet their family, arrange any embassy affairs and arrange extra tickets for family members and friends. It is always a safe place in the foreign. '