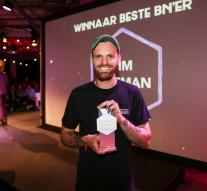 - Tim Hofman and the team of the Sunday program with Lubach have won the Best Social Awards on Thursday night. Both went home with three statues.

Lubach saw the award for best BN'er, but won three other prizes: Best Hype and Best Video for Sunday with Lubach movie America First... Netherlands second, in which the Netherlands represents the US president Donald Trump. That video went over the world earlier this year. The Lubach team also won the prize for the best deal with the Kamergotchi app around the Dutch parliamentary elections.

The Facebook page of the NOS won the prize for best news page and Instagram got the statue for best social platform. Jesse Klaver was named the best social media politician. Geert Wilders got the dubious honor to go home with the worst messenger price. He won for his tweet with a photographer Alexander Pechtold.