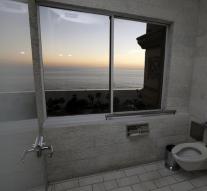 - A 32- year-old man with apparently high need mistreated his roommate because these " far too long sat on the toilet."

This was reported by the local police in nj. com. According to the police report, the toilet-goer was beaten and pushed through a mirror. The victim was taking cuts in the neck. The 32 year old defender was time for yourself to use the toilet, but his roommate did not make fast enough aanstalten place. That gave him blows. The perpetrator was a few cuts on the forearms on. He is charged with simple assault.
NEW