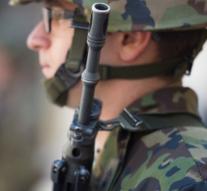 bern - Justice in Switzerland doing research on six soldiers in the snow had made a swastika and brought the Hitler salute. The newspaper SonntagsBlick published a picture of the six Swiss soldiers.

The photo was taken in Wangen, 60 kilometers south of Basel. Justice examines whether the six can be sued for racial discrimination.