Home / World / Hitler had indeed only one testicle 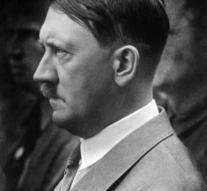 - In England for decades is a song about soldiers about Adolf Hitler, with the text: 'Hitler has only one ball, Goering has two children, Himmler also have one, but poor old Goebbels has no balls at all.' Now it seems that the song is not sitting next when it comes to Hitler.

There is a medical document surfaced in 1923, when Hitler entered the cell for a failed putsch in Munich. It is reported that the future Nazi dictator was suffering from 'cryptorchidism on the right side '- jargon for an undescended right testicle which was probably immature in the case of Hitler.

Previously, it was always assumed Hitler was a testicle lost by a shell splinter during the Battle of the Somme in 1916.