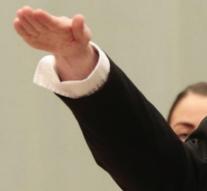 sofia - The new Bulgarian Deputy Minister of Regional Development has already gone after two days. Pavel Tenev was struck by a nine year old photo on which he brought the Hitler greeting.

The contempted picture shows how Tenev greets a wax image of a Nazi in a museum in Paris with his arm raised. The image was initially on the politician's Facebook page, but was removed soon after being appointed as deputy minister.

The opposition reacted furiously when the picture came to light. The Bulgarian socialists, according to BTA press office, said that 'someone who is cynical enough to take photographs of himself while taking a post-strait, not in government. '

Tenev complained that the fuss was excessive, but decided to resign. He stressed not to be a fascist: the picture would be spotting. According to the politician, he had taken pictures in the museum with 'all sorts of celebrities. '