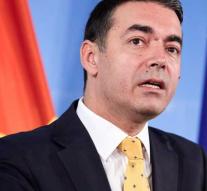 the hague - If Macedonia has solved the name issue with Greece and continues as Northern Macedonia, the European Commission sees no objections to start negotiations with the Balkan country on accession to the EU. Before the European foreign ministers decide on further enlargement Tuesday in Luxembourg, the Macedonian minister Nikola Dimitrov makes one final appeal to the Netherlands not to block the accession talks.

You were in the Lower House, consulted with Minister Blok and you promised a box of the famous Macedonian tomatoes for whom the accession negotiations are supported. Apparently you are not comfortable with the good outcome.

I think we have a good story. I would like to tell you that. We have overcome a political crisis and have made a huge turnaround as a country. We live according to European values ​​and make good progress in improving our rule of law, free press, fight against crime and corruption.

There are still concerns, about the transparency of appointments, about the business climate. That is not just gone if your country goes into negotiations tomorrow.

Right. But it is also not about joining the EU tomorrow. We have been in the waiting room since 2005. Since then we have received a position recommendation nine times, but because of the name issue we have missed many EU trains. Now there is a historic opportunity to make up for it.

From your perspective. But what does the EU have?

In the event of a migration crisis, you already saw that we actually already acted as the external border of the EU for the Balkan route. The Union can show success with us at a time when the EU needs successes. Churchill said: 'the Balkans produces more history than they can consume'. This is our chance to focus on the future. We are at a historic crossroads: either we go back to old friends, with uncertain outcome, or we join a European organization of society and use the accession negotiations that we are worth it and that this is the Europe we love.

According to some, it is a matter of geopolitics: quickly join the Western Balkans before the Russians take off with the loot.

That is a risky argument. Geopolitics can and must never be a reason for entry. In fact, if we make accession political, the process will fail. The only way to make this a success is to get rid of political charge.

The accession of Romania and Bulgaria has, according to many, gone too quickly and carelessly. What do we think we can learn from that?

As a minister of a candidate member, I am not in a position to judge EU member states. But I do agree with the position of the Dutch cabinet that the EU must strictly and fairly enforce the rules for expansion. The accession process is now stricter. I think that's good.

There will be a referendum on the name change to Northern Macedonia. The population is never going to approve that anyway? And then?

I think so. The agreement with Greece puts a question behind our identity. Our language is Macedonian. Our country is called Northern Macedonia. This brings to an end the confusion with the Greek region.