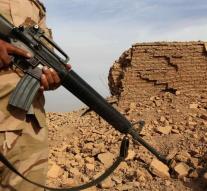 nimrud - Two days after the expulsion of Islamic State from the Iraqi city of Nimrud is clear what enormous damage has been done. The more than three thousand year old city, which was once the capital of the Assyrian empire lies in ruins, the BBC reports.

Already appeared images of IS fighters demolish the monuments and historic buildings in the city, but IS expelled, is only really clear how big the devastation. With bulldozers and other heavy equipment are large parts of the historic town reduced to rubble. ' When you came here earlier, you could imagine how life was back then. Now there is nothing, '' said Ali al-Bayati, a leader of a militia that fought IS. ' Everything is destroyed. The loss of Nimrud strikes me harder than the loss of my own home. ''

IS see art and architecture of Islam as idolatry that must be fought. World Organization UNESCO has condemned the devastation in vivid terms and speaks of a war crime. IS according to UNESCO ' clearly determined to obliterate all traces of the past of the Iraqi people. ''