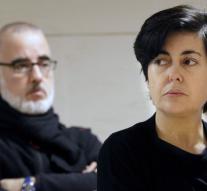 - A jury in the Spanish city of Santiago de Compostela on Friday a couple found guilty of the murder of their adoptive daughter. Alfonso Basterra and his wife Rosario Porto gave the twelve-year Asunta in September 2013 a huge dose of sedatives and then tied her hands and feet, and then the girl suffocated.

According to the newspaper El País wants the prosecutor that both parents for eighteen years behind bars disappear. The gruesome murder caused a lot of turmoil in Spain.

The couple adopted led originate Chinese daughter when she was a year old. The investigation revealed that Alfonso was always against the adoption. The problems started when Rosario suffered from severe depression. Then followed a period of domestic violence, heavy drugs, adultery and eventually divorced. Her mother gave her daughter to murder a while antidepressants. What ultimately was the immediate cause of the murder, remained vague during the process.