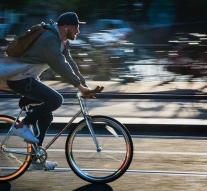 geraardsbergen - Bicycle theft has long been no crumble anymore. For the last two years, gangs from the Eastern Bloc have stolen about € 15 million bicycles at shops in Flanders, according to recent figures.

Especially expensive bike bikes, sometimes handmade, of 8000 euros or more are in trek. 'There are traveling gangs from the former East-Bloc countries, such as Moldova, Lithuania and Romania,' says Guy Theyskens of the police against VTM. 'After that, they get back and go fast and they know where to break and which bikes they should bring.'

Bike shops try to keep the gangs out of doors and are forced to put thousands of euros in extra security.

At S-Bikes in Geraardsbergen, in the heart of the Flemish Ardennes, the three past seven months have already broken three times. 'With concrete blocks they tried to break the windows to get in. When that did not work, they forced the entire door and broke down,' says the store's outbuilder. The thieves were aware of the types of bikes, because only the most expensive models took place. The entrepreneur estimates the damage at about 200,000 euros.