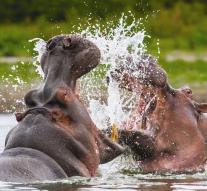 bogota - The Colombian town of Puerto Triunfo has recently added a number of undesirable people. Two hippos, according to the BBC by the drought drawn to the village to look for food.

The animals come from a special family. They were descendants of hippos that were decades ago imported by drug lord Pablo Escobar, who was shot in 1993. The gunman held a Private zoo after including elephants and giraffes.

The four hippos Escobar appeared to feel at home in the Colombian climate. Their numbers grew steadily increasing and a number of animals escaped from the ranch of drug baron. Meanwhile, we have more than sixty hippos around which there are now two have surfaced in Puerto Triunfo.

Biologists are still waiting for stun guns, so the hippos can be moved. Children are especially warned to keep away from the animals, who do not seem to feel called to leave on their own. They graze in fields around Puerto Triunfo and sometimes they walk through the village.