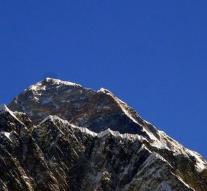 - The Hillary Step, a famous landmark and the last obstacle to Mount Everest's summit, has collapsed. This is probably due to a major earthquake in the Himalayas in 2015.

The 12 meter high rock wall was named after Sir Edmund Hillary. In 1953 he reached the top of the highest mountain in the world. The Step is technically the hard part of the Mount Everest to climb.

A British climber reports on Facebook that the Hillary Step has disappeared forever. Last year it seemed that rock wall was no longer there. That was not very visible due to a thick snow layer.