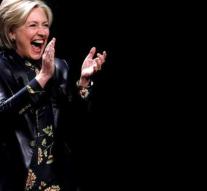 Nothing as painful as a bad loser. Hillary Clinton should have known that at the Grammy Awards, a show for the music industry, she read in a video recording from the book 'Fire and Fury' in which President Donald Trump was ridiculed.

It gave her applause, of course, for a room full of politically correct artists, but actually it was pathetic.

Clinton once again proved that she is no better than the man who is allowed to hold the State of the Union today and who does not get over that he is in the White House, but that Clinton won the 'popular vote'.

It also shows once again that there is certainly some truth in the further exaggerated attacks of Trump on the partisan liberal media, if you do not include his own home station Fox News.

That Clinton still has not understood that she owes her loss mainly to herself was already apparent from her book What Happened, in which she states that sexism and the media were guilty of her loss.

That she was even further from the crowd than a real estate millionaire did not come to her.

After her loss Clinton disappeared from the spotlights for a few days to walk in the woods, but the Clintons can not miss the attention. They have controlled politics and the Democratic Party for so long that they can hardly do anything else. Now Hillary wants to train young women who can kick it up as president.

There may also be other reasons.

The e-mail scandal in which Hillary used a home-garden-and-kitchen server to transmit documents, the suspicion that Hillary was behind the news of the Trump plasma incident in Moscow and the accusation that the Clinton Foundation was paying for their charitable causes. has assumed from less kosher countries, still hanging above the Clintons.

Keeping the power base intact is certainly important.