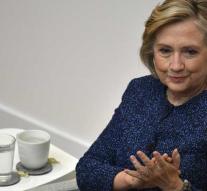 washington - Hillary Clinton will not make another attempt to become president of the US. She said that to the American channel News 12 Westchester and put an end to speculation that they might...

Clinton lost in 2016 as a Democrat candidate the current President Donald Trump's election. 'I do not join, but I continue to work and speak and stand up for what I believe,' she said.

In January there were noises from circles around Clinton that she had not completely closed the door to elections.