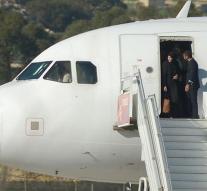 - The hijacking in Malta is over. The hostage-takers surrender.

So says the Prime Minister of Malta on Friday.

All passengers and crew members of the hijacked Libyan device Friday in Malta landed, were released.

The airliner was hijacked on a domestic flight. There were a total of 118 people were on board.