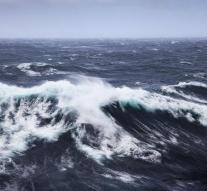 geneva - A wave of 19 meters high is officially the highest ever recorded in the books. The World Meteorological Organization (WMO) said Tuesday in a 'remarkable record', which will take its place on the list of weather and climate extremes.

It took the wave inrolde the books of the specialized United Nations agency. The wave was registered in February 2013 by a buoy equipped with instruments in the Atlantic, somewhere between Iceland and Britain. The previous record of 18.3 meters, six years earlier was located in the northern part of the ocean.

According to the WMO emphasized the measurement once again how important it is for the safety of navigation to keep observing the sea conditions.