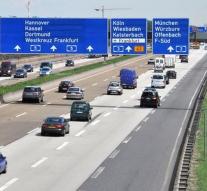 - Motorists who do not abide by the traffic rules in Germany are there in the future to go heavier fines. The Germans run severely out of line in comparison with neighboring countries. The interior ministers of the Länder will next week urge at a meeting in Saarbrücken on the revision of the 'price list'.

They are like the 'Editors Network (RND) reported Thursday, in favor of tougher action against speeding, keep too little distance, dangerous overtaking and grant passage to emergency services. 'It can not be that for the latter offense has to be paid only 20 euros,' said Lorenz Caffier (CDU, Mecklenburg-Vorpommern) and spokesman of the ministerial consultations. SPD'ers want to depend fines of income.

Transport Minister Alexander Dobrindt left in the 'Münchner Merkur' knowing alignment of penalties for specific offenses to find meaningful than an overall increase. This has already happened, for example, illegal street racing and the use of electronic devices while driving.