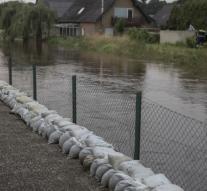 - Again threatens flooding in a German A3 motorway river between Arnhem and Oberhausen. Due to heavy rains threaten the dykes of the Issel river to fail. In a breakthrough, there is no traffic possible on the A3.

The fire is in place Hamminkeln, about forty kilometers from the Dutch border near Zevenaar, plucked up by as much as 27 cars. More than 130 firefighters are trying to strengthen the dive with sandbags.

In early May the dam threatened to fail though, but it ran just well. About six hundred men were then in rope to prevent a possible collapse. The dike was reinforced with about 68 000 sandbags.

More than 130 firefighters were summoned to the weak dike.