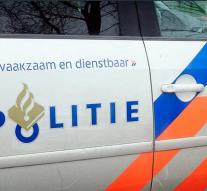 losser - A pregnant woman is severely beaten last Monday. At the town hall in the Overijssel Losser she was kicked by three men from her bike.

The victim told the police that the three men insulted her. Then she kicked her front wheel, allowing the woman fell forward and holding her belly landed on the wheel.

After an extensive check at the hospital revealed that the woman include sustained a bruise on her belly. The baby is happy all is well, the police said on Facebook.


The three men are still being sought.