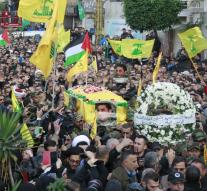 - 'Death to Israel,' chanted Monday thousands of supporters of the Lebanese group Hezbollah during the funeral of the prominent commander Samir Qantar. The Lebanese came last weekend killed when the house where he was staying in the Syrian capital Damascus with missiles was destroyed.

Israel responded several politicians welcomed his death; Qantar was still hated by many because he was in 1979 when 16-year-old involved in the murder of Israeli civilians in the village Nahariya. Among the victims were a father and his two children. Qantar was caught and sentenced to life, but in 2008 he was released through a prisoner exchange.

Apparently Qantar was recently active in Syria for Hezbollah, which fights in the civil war on the side of the regime. Israel has neither confirmed nor denied that it is behind the attack. Hezbollah, however, is convinced. Samir is one of us, a commander of our resistance and it is our right to his assassination reward , said leader Hassan Nasrallah on Monday.