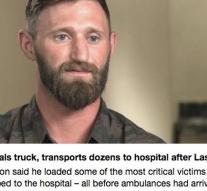 las vegas - In the aftermath of the bloody massacre on The Strip in Las Vegas, more and more stories come from witnesses and helpers.

A navy veteran immediately loaded 20 (heavy) injured visitors from the country festival to a stolen truck and brought them to a hospital.

Taylor Winston did not think of a moment and took the first to pick up the best pick up truck as soon as possible. Even before the ambulances arrived at The Strip at the massacre, Winston was behind the wheel of the white vehicle. On the back seat and in the luggage, the victims of massacre Stephen Paddock were killed, who killed 59 people at the massacre and injured over 500.

"I went with a friend to get some drinks at the festival and met some friends at the stage," said the ex-marineman (29) against CBS News. When he was dancing with his girlfriend Jenn, the bursts broke away from the 31st floor of the Mandalay Bay hotel.

The crowd wanted to flee, but fences around the festival site made it difficult. "I saw that people were hit by bullets. It felt like we could be hit any moment. When we came to a fence I helped some people over it. It seemed like a mini war zone, but we could not fight back, "said Winston.

"On a field I saw some trucks. In the first we opened the keys were by chance. Then we started collecting wounds. It was horrible how much blood there was everywhere. Once we have deposited them at the hospital, we returned again. In total, we have transported 20 or 30 people. "

Winston was broadcast twice to Iraq in his career. He does not want to get the stamp 'hero'. "I've seen a lot of people doing very good things."

He has returned the keys to the owner. Winston has no idea whether his passengers have survived.