Home / World / Her cancer was 'only a phase', popular blogger (24) still died 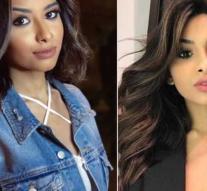 - Brazilian Nara Almeida was 24 and shared her fight against cancer with her more than 4 million followers online. Even after she had been told that the cancer would be terminal, she remained positive: 'It's just a phase.' Now her friend has announced her death.

Nara Almeida already had a lot of followers when she was told on 8 August last year that she was suffering from stomach cancer. Since then, she has shared every step of her treatment on social media, inspiring her millions of followers with her optimism.

Even when she was told after months of fighting that the disease had spread to her other organs, Nara refused to give up. 'The doctors have confirmed to me that my condition has become more serious, there is no hope for cure,' she wrote. 'But I repeat it again:' It is only a phase. I am sure that this will not be my end. '

In March she was in intensive care for five days, but she remained positive. 'Nothing can go above without breathing. I have been numb for three days without any sense of the outside world, I thought I was lost, but God gave me a new chance. Every day is a new chance for improvement. '

In her last post she wrote that she had chosen immunotherapy together with her doctors. A last straw that she clung to. But it did not help. Pedro, the friend of Nara, announced on Instagram that the model was deceased.

'Nara died last night', she wrote. 'After her long fight I wanted to have her with me forever, but she deserved peace. Her death leaves a big emptiness in my heart, but she continues to live in me forever. She will always be my inspiration that makes me see the world in a better way. I am convinced that she will continue to transfer her strength to many people, because that was her goal. Rest softly, my love. '