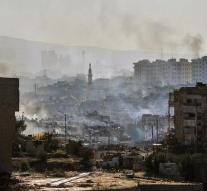 damascus/reyhanli - Thursday there is also help on the way for Syrians who are besieged by jihadists in the north of the country. From Turkey are almost thirty trucks and ambulances to the besieged villages of al-Foua and Kefraya. Thursday also began evacuating jihadists and rebels from the east of the city of Aleppo.

For the evacuation of eastern Aleppo Wednesday would all go into a file. But that's only worked one day later, reportedly because militias fighting for the Syrian government on Wednesday also demanded help for the besieged in the villages. As injuries have from al-Foua and Kefraya be evacuated.

The evacuation of the last warriors and citizens of eastern Aleppo on Thursday put in motion. There are some incidents reported. On cars from a convoy of evacuees was shot and jihadists would have fired rockets at the western part of the city.