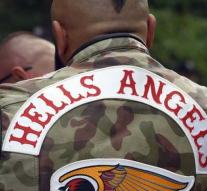 dusseldorf - The police in Germany suspect members of the motorcycle club Hells Angels that they have attacked a pizzeria in the city center. In that attack, when a garbage can was thrown through a window and tear gas was sprayed, 34 people were injured.

The pizzeria is located in the Bolkerstrasse. In this nightlife street of Düsseldorf, Thursday was already very busy due to the carnival. Initially it was assumed that it was a carnival quarrel that got out of hand.

The police arrested four suspects. According to Bild, a Hells Angel would have threatened the restaurant owner shortly before the attack. He wanted to have a share in the pizzeria. The attack shows many similarities with the brutal attack in November on another case of the same restorer.