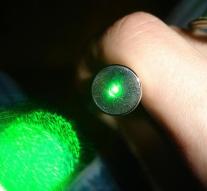 - A pilot of a police helicopter in Germany has become so wounded by the light of a laser pen that he had to surrender the controls to the co-pilot and eventually ended up in hospital with severe eye pain. The police later arrested a sixty-man strong light would be focused on the pilot.

The incident was Wednesday in Berlin. The man had from his home focused the laser pointer at the helicopter. He later stated that he was disturbed by the sound of the instrument. The man is being prosecuted for endangering air traffic and inflicting serious injuries.