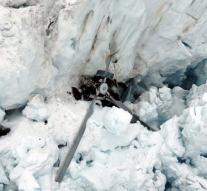 - A helicopter with seven people on board crashed Saturday in New Zealand. None of the occupants survived the crash, the newspaper The New Zealand Herald. It involves six passengers and the pilot.

The crash took place at the Fox Glacier on the west of New Zealand. The glacier is visited annually by thousands of tourists. The identity of the victims is still unknown.

A rescue team was brought by helicopter to the scene of the accident. It took the victims were found, because the area because weather was difficult passable.

Causing the helicopter crashed, is unclear.