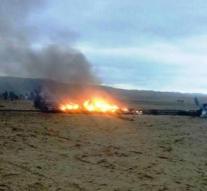 kabul - Afghan security forces are trying Wednesday to rescue eighteen people on Tuesday were taken hostage by the Taliban. That happened when the helicopter in which they were had to make an emergency landing in an area where the Taliban have control, reported the Afghan Ministry of Defence. During the attack on the helicopter two soldiers and a crew are slain.

The helicopter is a foreign company. The unit had technical problems over the northern province of Faryab. Who were on board, is not clear. An anonymous official in the US Department of Defense denied that US soldiers are captured. According to The New York Times there are thirteen Afghan soldiers and captured two foreigners whose nationality is still unclear. The Taliban claim that they are Americans. #Taliban Carrying #Afghan Army soldiers in a police Ranger, after Their Helicopter did emergency landing. pic. twitter. com / Tx74PEZ8Bo- Pajhwok Afghan News (pajhwok) November 25, 2015
NEW