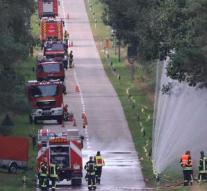 stavern - A long fierce heather on a training ground of the German armed forces has finally been extinguished. On Wednesday, the 'Bundeswehr' reported that the fire at the village of Stavern, about 35 kilometers east of Emmen, had been extinguished after five weeks. There are still 160 of the original 1600 firefighters present, but there are no more fires to be seen.

The fire broke out on 3 September. The German army came under fire over the approach to the fire. It originated from a missile test on the moor, but the army initially barely made public appearances about the fire. When, after all, it threatened to get out of hand, the soldiers knocked on all sorts of civil authorities with the request to come and help put out.