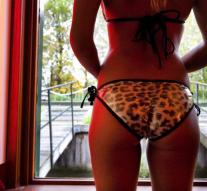 - After 2.5 years of discussion, the French legislature Wednesday states that paid sex is an offense for the customer. The French lower house voted for the bill, which allows customers of prostitutes can expect fines up to 1,500 euros if they are caught. Happens again, the fine rises to 3,500 euros, French media report.

France is the fourth country in Europe that punishes the client of prostitutes, after Iceland, Norway and Sweden. The Minister for Family, Children and Women's Rights, Laurence Rossignol, said that buying sex harms human dignity.