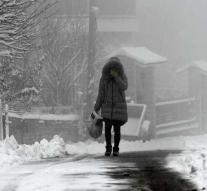 athens - Heavy snowfall has turned large parts of northern and central Greece into a winter landscape and caused considerable traffic problems. According to the state television ERT it was for...

Hundreds of people spent the night at Thessaloniki airport because many flights had been canceled. Some aircraft landed in Skopje in Macedonia or in Timisoara in Romania. The passengers would be brought to Greece by bus, it was said.

Many country roads in central and northern Greece are only accessible with snow chains. In some regions the electricity has failed, the state radio reported. It will continue to snow in the coming days.