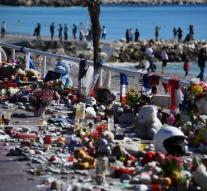 grasse - A French couple on Thursday in the southern French Grasse received a heavy sentence for defrauding a fund for victims of terrorism. The judge wanted according to French media set an example and punished the two to six and three years in prison.

The couple from Antibes had been reported as victims of the attacks in Paris on 13 November last year. The 30-year-old woman said, for example, be blown away by a bomb blast at the Stade de France in Saint-Denis. Her 36-year-old partner presented himself as battered victim. They got a special assistance fund each 30 000.

The money was fast. After the bloody attack in Nice on July 14 this year, she served again as victims of terror in a request for support. That caused suspicion among the benefits agency, which turned on the police. Which concluded that the two were just in Antibes during the attacks. The man received the longest jail.

Earlier this year, two women were lighter punishment, a prison sentence of one year on probation because of attempts to lift the fund. One stated, for example, to be hit by an explosion in a cafe where terrorists only on shots.